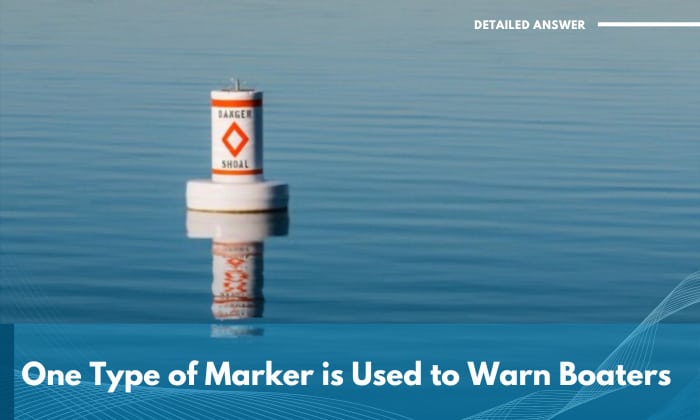 Despite all the fun to be had when navigating the earth’s waterways, risks and dangers invariably still lurk in them. This is why safety equipment like life vests, flares, buoys, and markers is necessary in the first place. Did you know that one type of marker is used to warn boaters about common maritime hazards?

Aside from other non-lateral and regulatory markers, boaters should know of inland water obstruction markers, which are characterized by their black and white upright stripes. The area starting from where they’re placed up to the shore is considered dangerous.

Other markers and buoys are worth knowing, though, so continue reading to learn about them.

Different Safety Markers and Buoys and What They Mean

The main topic of this post is the inland water obstruction marker, which basically tells you not to pass between the marker and the shore. It could be because there are high, sharp rocks in there.

There may be debris, underwater foliage, and other submerged objects in the area as well, which might get sucked in by the turbine or the intake found in boats with jet propulsion systems.

As I mentioned above, though, there’s more than one non-lateral marker that helps warn boaters of danger. These go in different areas people should be avoiding or where they should be adhering to specific regulations. 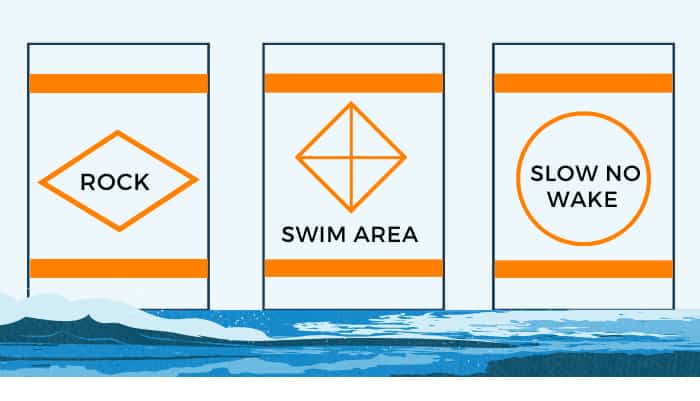 On the whole, these are regulatory markers that directly warn sailors and are not to be ignored.

It simply won’t do to put them in the same category as the more “benign” ones such as the white buoy with a blue band. That marker only means you can moor using that buoy, a privilege that only that type of object can legally provide.

So Which Markers Mean You Can Safely Pass Through? 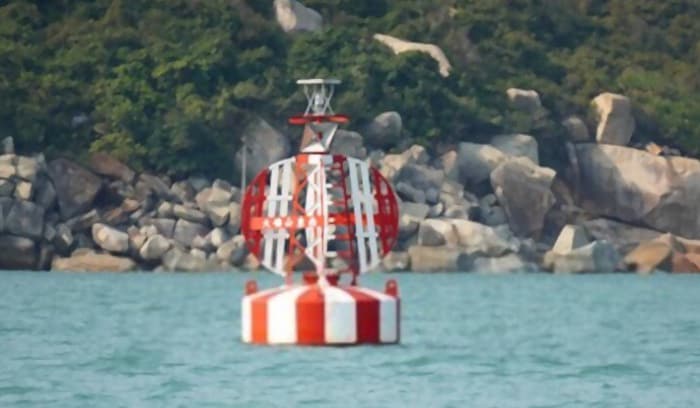 Since we’re talking about danger markers, let’s go all the way and discuss the one that indicates safe water.

You have to look at the colors again, in the same way that you should pay attention to the colors appear on a mooring buoy or a non-lateral marker that warns you of potential danger. Let’s start with what color are safe water markers.

If you happen to be cruising in the San Juan Islands or any of your favorite sailing/fishing spots and encounter a white marker with red vertical stripes, then that’s a safe water marker. Feel free to pass on either side of that buoy.

Notice how it’s patterned similarly to an inland obstruction marker? There’s a variant of it that only paints either side with red and white. Regardless of which version you see, it still means the same thing.

So, to sum it up, if you’ve always associated the color red with caution, you may have to tweak your mind a bit if you plan to become a long-term boater.

Red accompanied by white is the color of safe water markers. It will do you a load of good to remember them, along with those that warn you of risks to keep you and your loved ones safe on your next boating adventure or fishing holiday.

If we’re going to consider the main categories for boat markers, one type of marker is used to warn boaters, indeed, and it’s the non-lateral or regulatory marker. However, not all of these markers warn boaters, as evidenced by the specific ones shared here.

Only the inland water obstruction marker and those with orange diamond and circle symbols serve as warning signs. Some just tell you that you can safely pass through, while others help in your mooring and anchoring. Still, we can’t deny that all of them aid in keeping boaters safe.