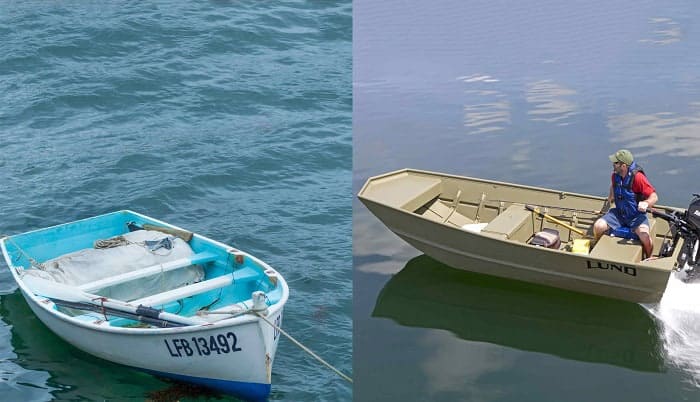 Skiffs and Jon boats can both provide benefits to anglers who are fond of inland waterways. They are usually spotted in the same body of water, but they still have differences. Hence, this article will show you the details of the skiff vs Jon boat.

You’ll find out about their distinct designs and how their performances differ even though they are in the same environment. Upon knowing these things, you’ll be able to tell them apart and which one you will take when sailing in a specific place.

Differences Between Skiff And Jon Boat

Various boats can be referred to as a skiff while a Jon boat is available in two types (these types will be detailed discussed later). Skiffs are controlled via console, whereas Jon boats are through an outboard or trolling motor with clamp.

You’ll find Jon boats as shallow-draft vessels with flat bottoms. Not all of them have a flat bottom.

The structure of Jon boats can also be seen on some skiffs, but somehow, the construction is different. However, what these two vessels have in common is that they can both be found on shallow water.

Some comparison of these small vessels:

Jon boats with their flat bottoms are made of aluminum, wood, or fiberglass. There are one, two, or three seats in every vessel. An outboard motor is loaded over its transom while being used for fishing and hunting.

The description of a Jon boat may remind you of the aluminum skiff. It’s usually taken to relaxing river trips or fishing escapades on shallow water.

A skiff can be defined as a small craft with a pointed front and flat bottom too. Aside from aluminum, you’ll find skiffs in other materials just like Jon boats. 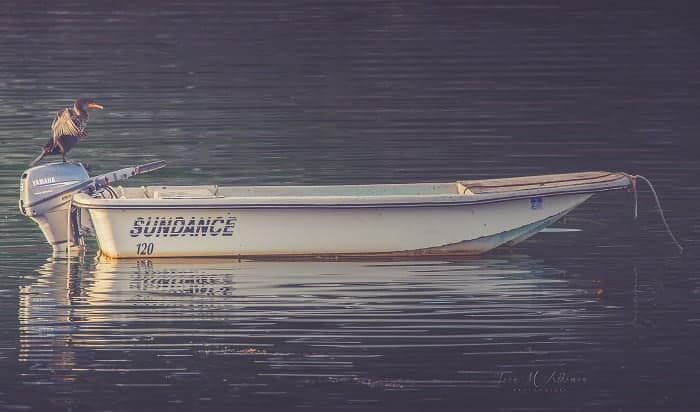 What makes skiff one of the popular water vessels is its wide range of variations. It can be referred to as different kinds of small boats; but, some may be bigger than Jon boats.

The stability of skiffs on calm waters is notable, and it makes them great as fishing vessels. The common type is controlled through a console that is situated in the center of the boat.

Skiffs offer plenty of space with their wide-open decks. You’ll have enough room for gear, passengers, and even removable or permanent tanks. They’re more powerful than Jon boats because they’re bigger.

Skiffs can traverse through waterways with the help of a propulsion pole. However, they can’t be on the extreme shallows that a Jon boat can access. You can’t paddle or row a skiff, unlike Jon boat.

This type of skiff got its name due to its bottom structure for obvious reasons. It’s a feature that makes it suitable for shallow waters. Most boaters use it on inland waterways from lakes to rivers to inlets.

Taking it to exceptionally shallow waters involves trimming an outboard motor and getting the prop out of the water. A long pole is needed to maneuver the skiff. But then, not all skiffs have a flat bottom.

Semi-V skiff has similarities with mod-v Jon boat. It’s versatile because it can be in various marine environments and even on choppy waters. However, it doesn’t work well in shallow waters with its relatively deep draft.

This skiff will likely be crossing deep rivers and lakes and off coastal areas.

All About Jon Boat 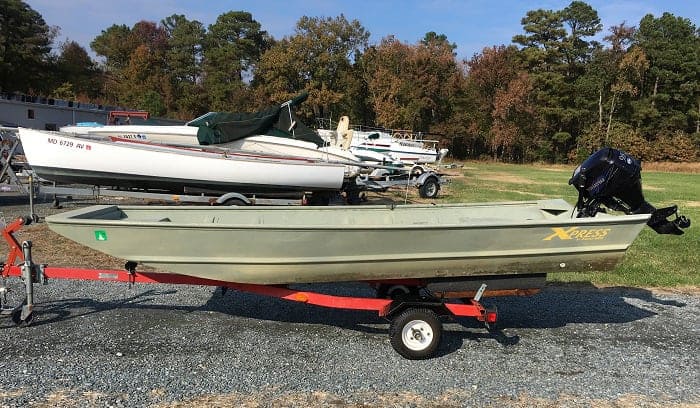 A Jon boat is viewed as the authentic American traditional vessel on the water. This has been used since the pioneering period. Hence, it’s apt for a couple of activities like fishing, hunting, and exploration.

Its remarkable ability is navigating through shallow waters. You’ll be amazed at how it can pass through water that is only a few inches deep! This vessel is also known for its flat bottom, shallow draft, and low freeboard.

It’s more affordable than skiffs and other crafts. Yet, it can let you experience a nice ride over calm waters. Favorably, you can control it in various ways, such as rowing, punting, and paddling.

You also have the option to add an outboard motor on it or a tiller to help you control the vessel. It’s stable on inland waters, but with its versatility, various kinds of customization make it capable of facing the ocean and rough waters.

Here are the basic types of Jon boat:

Don’t wonder why it’s the standard type of Jon boat because it’s the first-ever to be used for fishing, hunting, and even bow fishing. In addition, its performance on inland waters is simply outstanding, while its stability on calm water is awesome!

Due to its flat bottom, it’s a challenge to go along with rough waters. Moreover, the square bow of a Jon boat is not efficient enough to counter waves. Due to this shortcoming, it becomes unstable on rough waters.

This drawback only challenged boat makers to come out with brilliant ideas. Thus, the birth of the Mod-V Jon boat took place.

Semi-v Jon boat is another term for this type of Jon boat. Unlike the flat bottom type, it has a more pointed bow, and the front part curves upwards to form a V shape. This structure assists the boat in cutting through choppy water.

With the changes of design, Mod-V can surpass the waves which a standard type is incapable of. Therefore, it’s clear that it’s way superior to the flat bottom. Nevertheless, both of them are great for fishing and hunting.

Which Is Safer, Skiff, Or Jon Boat?

Generally speaking, skiffs are safer than Jon boats. However, it’s relative from case to case. For instance, it’s safer to be in a Jon boat with an expert than on a skiff with an inexperienced operator.

Hence, you can’t ensure safety unless the operator is an experienced one. It’s given that larger vessels are capable of handling rough waters and bad weather conditions. On the other hand, the experience will teach the driver to handle different situations.

There are many examples to prove this. Crossing on a shallow or slow-moving body of water is good with a light boat. You’ll have a smooth ride with minimized pounding on a calm lake even though there’s a load of gear on your boat.

When unfortunate chances come along, like when a storm strikes, the waves come up and weight becomes a liability. Understanding the circumstances, you’ll just beach your boat and wait for the storm to leave before returning to sailing.

Therefore, experience and skills in handling either a skiff or a Jon boat matter the most. In the present, it’s easy to find skiffs that are from 13 to 24 feet long. Bigger ones can handle rougher waves than the 13-foot boat.

These long skiffs can be taken out to the sea even if the weather is rough. You also have to know that it’s not good to choose them when you’re sailing on a fine day. This practice can get you in trouble considering the skiff’s low sides.

Featuring the comparison of skiff vs Jon boat in this article shows you the distinctions of these crafts. Their features have purposes so that the usage will depend on the body of water, weather conditions, and the marine environment.