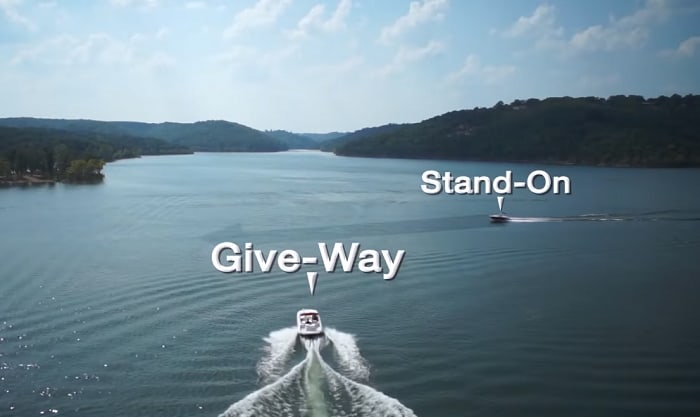 COLREGs or the Convention on the International Regulations for Preventing Collisions at Sea defined two terms to identify vessels that cross paths. Water vessels can be distinguished as stand on and give-way.

This article is mainly about ‘what is a stand on vessel’. It’s recognized as the vessel that maintains its speed and course until the give-way vessel doesn’t proceed with the pertinent actions.

If you’re in the stand-on boat, avoid turning towards the give-way craft or crossing in front of it. Various situations may occur when you’re in the waters. So, read on to know more than just the stand on vessel definition.

Stand On Vs Give Way

You may wonder how to identify or when to act as a stand-on vessel. Generally, you’ll be given the right of way but it’s not absolute because you can have it once it’s safe and possible. Boat operators should always be alert and responsible. They should track the surroundings to execute the right actions and avoid collisions.

Comparing it to a give-way boat is a helpful way. First, you have to know how two vessels that meet are propelled.

The manner of approaching each other also varies, such as:

Furthermore, a power-driven vessel should approach in a way that prevents collision from happening. Appropriate action must be observed at the right timing or even earlier.

A sailing vessel is considered the give-way vessel when meeting the vessel that’s unmanned and engages in commercial fishing with restricted maneuverability.

Water vessels that engage in commercial fishing should always see to it that they avoid those that are not under command or with limited maneuverability. You must study the situations around you when sailing.

When you see a boat that moves in water that is shallow for safe passage, give them enough room to navigate. Regardless of circumstances, it’s good to take precautions and execute appropriate actions in advance to prevent accidents. Don’t forget to duly communicate with your fellow boaters as well.

Install trustworthy VHF radios from Uniden, Cobra, and Standard Horizon so you can reach out to sailors you meet and be updated with what happens around you.

How About With Two Power-Driven Boats

There’s a high chance of collision when there are two power-driven boats that both come close at a right angle. But if each act based on their proper roles, mishaps won’t happen. The one that is on the right should be the stand-on vessel.

This vessel is expected to pass through the stern. The other boat should slow, stop, or reverse until the stand-on vessel has taken its chance to pass safely.

It’s a different story in the overtaking scenario. Regardless of whether the vessel that overtakes is manually or power-driven maneuvered, the one that overtakes should be the give-way vessel.

The Right Of Way In Various Situations 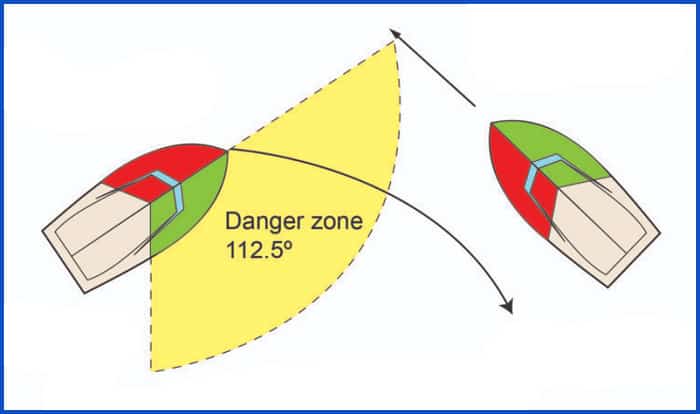 With the photo above as the basis, the vessel shows the green arc to claim its right of way as a stand-on vessel. To do so, a sound signal should be conveyed to the other vessel in times of emergencies and low visibility. You can use a whistle, pealess whistle, and air horn.

This yellow arc is referred to as a danger zone, which reminds another vessel to take precautions. Sailboats and vessels that are manually controlled are favored to have the right of way than the ones with engines. The only exception to this is when those types of vessels are overtaking.

Pleasure boats that are below 20 feet long should be prepared in taking substantial and early actions to give way for vessels that function for commercial fishing. It doesn’t matter whether they’re motor or manual powered.

These pleasure boats are known to have limited maneuverability including their fishing equipment. Large, deep draft vessels can also be the stand-on vessel as they can’t move quickly.

You can usually find them in traffic lanes and narrow water. It’s recommended to stay away from vessels with restricted maneuverability and be in outer limits, specifically on the starboard side.

Here are some rules for sailing vessels that meet head-on:

The main reason that the terms stand-on and give-way vessels are created is to prevent collisions and accidents. Thus, take note that it’s a crime to take actions at the last minute as they’re equivalent to creating danger.

Vessels don’t have brakes like cars that you can stop any time you want. You steer them from the back and minimum power is essential to keep the steering control. 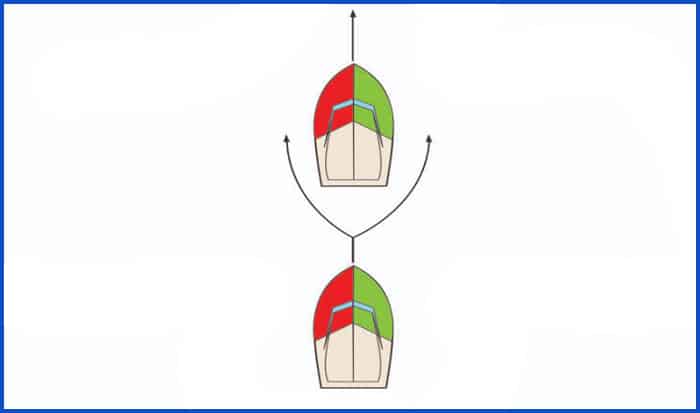 Overtaking another vessel means getting close to its stern. You continually move forward on either side. The vessel that overtakes is the give-way vessel and it must move to ward off collisions.

When overtaking a boat at night, you’ll likely see the stern light of the stand-on vessel instead of the navigation lights. The give-way vessel should take initiative to move around it with caution.

The two vessels should communicate using horns. Seasense, Amarine, FIAMM, and Marinco produce the quality ones. The vessel that overtakes will start to send the signal.

2 shorts blasts = I’d like to overtake you on your port side.

1 short blast = I’d like to overtake you on your starboard side.

If the stand-on vessel agrees with it, it will release the same sound.

Sailing or indulging in water activities is not all about fun. You need to avoid danger rather than getting out of it. You may find yourself confined in a difficult situation with hopelessness so knowing what is a stand on vessel is one of the ways you can traverse the water safely and take precautions.