Water markers have distinct features that make them easily recognizable. However, knowing them all is difficult, regardless of how easy they are to spot.

Red and Green markers are among the most easily recognizable water markers. Knowing what do the red and green markers indicate is a big step in navigating your way through the open waters.

Keep reading and learn one of the easiest ways to keep your bearings out at sea.

What Are Red And Green Water Markers? 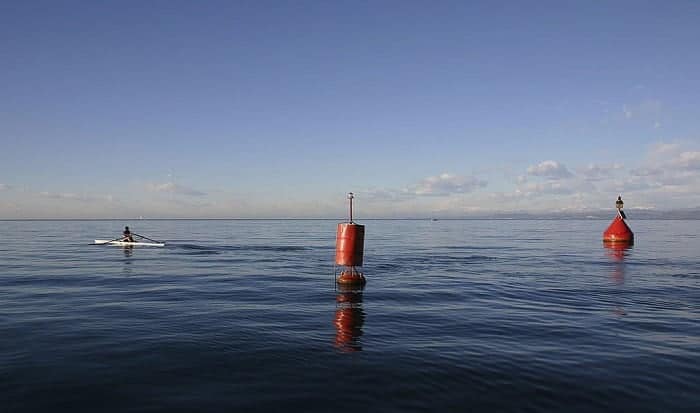 First, let’s clarify, red and green water markers refer to lateral markers. These are the starboard hand marker, the port hand marker, and the bifurcation marker.

Lateral markers are a type of water marker that marks the boundaries of the water to indicate a channel or waterway. They indicate the section of water that is established for the passage of water vessels and is thus considered safe water.

Aside from establishing waterways, they are also used to aid in navigating and directing traffic on the water. Red and green mean specific things, along with other indicators on these markers such as numbers and sometimes even shapes.

Below, we’ll discuss each of these markers in more detail.

What Do the Red and Green Markers Indicate

The red and green markers are the most basic boating markers. These are easy to use and you only need to use one of them, depending on where you are going, whether you are going back to shore or you are headed to the open water.

Aside from their color, we can also see numbers on these markers. For the starboard hand markers, the numbers are always even and the number goes higher the further upstream we go.

Another indicator that can be found on red markers is a triangle, but these are only used for day markers. Day markers are like traffic signs along the side of the road. They are fixed to solid ground with a post.

These green markers, along with red markers, are the standard marker pair for establishing a waterway or channel.

Green markers can also have a shape as an indicator; this is the square. Also similar to red markers, we see these only for day markers.

There is also a buoy with red and green bands. This is called the bifurcation marker and serves as the indicator for diverging water channels.

While all bifurcation markers serve the same purpose, there are slight variations between them — the distribution of red and green may differ. While the differences in the color of the body can be inconsequential, it’s the top that we have to pay close attention to.

Other Important Markers To Know 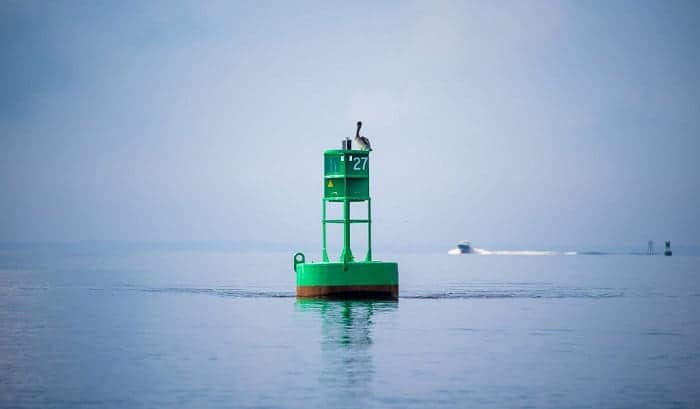 These are red and white markers that indicate an area of water is safe for passage. They are usually found in the middle of a water channel, so it’s a good idea to know what they are there for to prevent any confusion.

Mooring buoys are not just for indicating something, they are also functional. These are used to indicate a recommended place for mooring to prevent large vessels from hitting the sea bed.

They are also used for mooring to help avoid the need for deploying anchors. These are usually used in areas with corals because deploying anchors damage the corals and the sea bed, leading to the destruction of fish habitat.

As for mooring buoy colors, they are white with orange stripes. There are different types of mooring buoys, however, and they can be complicated to use depending on the type.

This refers to the flow of water. Water flows toward the sea or ocean; therefore, upstream means against the flow and is the direction towards land. Saying upstream when referencing a red buoy meaning means we are going back to shore or heading inland.

Preferred channel refers to the side of a diverging channel that is bigger or wider of the two. The other channel is called the secondary channel.

Water markers are an essential part of boating and one you should not take for granted. Hopefully, this short guide was able to help you get started on learning such a vital tool for navigating the open water.

If you found this guide helpful, please share it and leave your comments below. Happy boating.