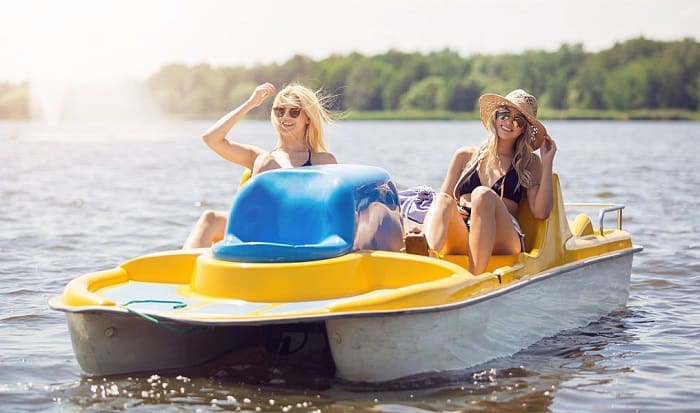 The pedalo is a mainstay at boat rentals found almost anywhere, but it seems to be known by many names. What is it really, a paddle boat or pedal boat?

A paddleboat is any watercraft with a paddle wheel, while a pedal boat uses a pedal to operate, but in many instances, they are the same thing. Let’s cover this watercraft that always seems to bring fun in the sun.

The pedalo is a popular watercraft known the world over. It can be ridden alone or by a group and is a fun boat for kids and adults alike.

This name refers to any boat with paddle as propulsion. This creates considerable confusion because a paddle refers to more than one thing.

What immediately comes to mind would be a bladed oar used in most plain small boats such as kayaks and canoes.

However, it may also refer to the paddlewheel that uses multiple paddles connected by a framework structure.

Any watercraft that makes use of a paddlewheel is also called a paddleboat. Modern paddle boats serve mainly as recreational vessels, but the older ones were large boats or ships used for ferrying passengers or transporting cargo.

Some old boats are still in operation today as part of a fleet for historic preservation. 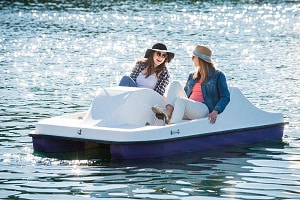 More popularly known as a pedalo but may also be called a water bike, the pedal boat is a human-powered boat with pedals and is mostly used for recreation. While the pedal is often turned using feet, some designs are intended for use with hands instead.

Pedal boats use a pedal to turn a paddlewheel which propels the vessel.

Because of the presence of a paddlewheel, pedal boats are also considered paddle boats. Many people have used pedal boats to establish world records for human-powered vessels or exercise.

There are many different design variations for pedal boats, and while many are intended for use by one person, 2 person and 4 person paddle boat types are also available.

Pedal boat seats also vary, with operator seats possibly being a regular seat or a bicycle seat of sorts. A modern paddle boat with motor is rare but not unheard of.

The paddlewheel and the paddle steamer are important in the history of both boating and commercial trade. Let’s take a look at these two significant pieces of technological development that ended up defining an era. 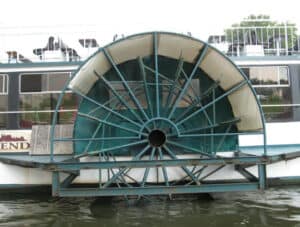 The paddlewheel is something that may no longer be considered significant in modern boating but is among the most important points of development in boating technology.

While it came into widespread use during the 18th and 19th centuries, it is thought to have come into being much earlier, with various evidence supporting this fact.

The paddles on this wheel function similarly to standard paddles or oars that propel a boat by pushing off on the water.

This concept was documented as early as the late 13th century to the early 14th century in designs.

It was also mentioned much earlier in multiple Chinese texts that claimed their use in naval warfare from the 5th to the 7th century.

Early boats documented that made use of them could accommodate just a few people at a time. Historically documented designs included those that resemble the pedalo but used crankshafts operated with the hands instead of pedals. 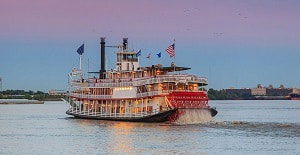 During the 19th century, in the steam engine era, steamships were one of the biggest drivers of commercial trade in the world.

Among the most prevalent such vessels was the paddle steamer, which used a steam engine to turn paddle wheels for propulsion.

After the success of steamboats in the latter half of the 18th century, bigger vessels were necessary to better drive trade. This resulted in the development of the paddle steamer, significantly bigger than the earlier river steamboat.

With hulls and wheels made of steel, these ships went on to traverse the open sea and drove international trade.

During the first half of the 19th century, this boat was often used but eventually lost ground.

However, it retained its popularity for use in rivers until the late 19th century due to the very low draft that paddlewheel use afforded, making them ideal for use in specific bodies of water.

Two types were most common, the sternwheel and the sidewheel.

The sternwheel was considered the more effective design but posed numerous problems in its difficulty to manufacture due to problems with the concentration of weight at the stern.

These wheels also needed some protection with the use of a cover that made the stern even heavier.

The sidewheel was relatively easier to produce with its paddlewheel at the center of the boat, making weight balancing more manageable.

However, this design was more prone to performance issues that often plagued paddle steamers.

Perhaps the biggest reason for both the paddle steamer and paddlewheel losing ground in usage were two reasons.

First is the challenge that their construction posed, while the second has to do with their inefficiency in use for transporting goods and cargo.

Cargo ships are expected to transport large amounts of goods, and the heavier a ship’s cargo, the deeper the hull sets into the water.

The problem is that paddle wheels are sensitive to depth displacement giving rise to performance problems. The level of paddle immersion greatly affected the power transfer that dictated how much force a boat is propelled with.

The material used for producing wheels was also problematic, being made of steel or wood, which are both heavy.

After they fell from favor in trade, paddlewheels found renewed interest during the mid-20th century when they were utilized in the production of recreational watercraft. The weight problem was offset by the use of much lighter plastic material which made production cheaper. 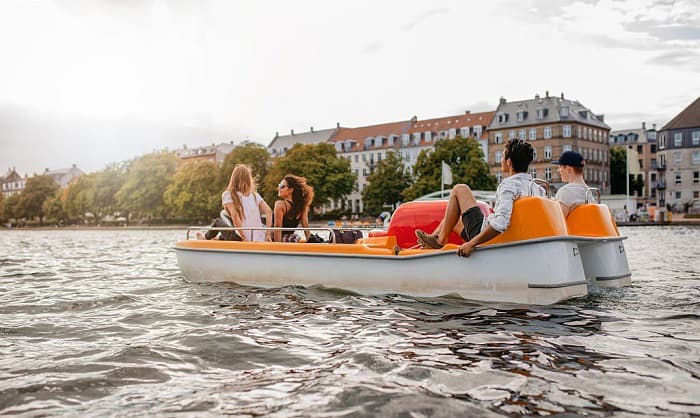 There are many different designs for paddle boats, and their appearance may vary.

It’s harder to identify a paddleboat using the presence of a paddle boat wheel because these are usually hidden away for protection. Still, the presence of such a wheel is a surefire indicator.

2. What are paddle boats made of?

Modern paddle boats are mostly made of plastic as are most pedal boat wheels with some metal parts.

However, these are known to have problems with pocketing water. There are aluminum ones as well that address this problem with their alternative design and material.

Now you know that any boat with pedals is likely to be a paddle boat as well. Along with the development of the paddlewheel, you’ve become familiar with how modern paddle boats and pedal boats came to be in use.

If you know anyone getting confused about paddle boat or pedal boat, help them out with what you’ve learned.