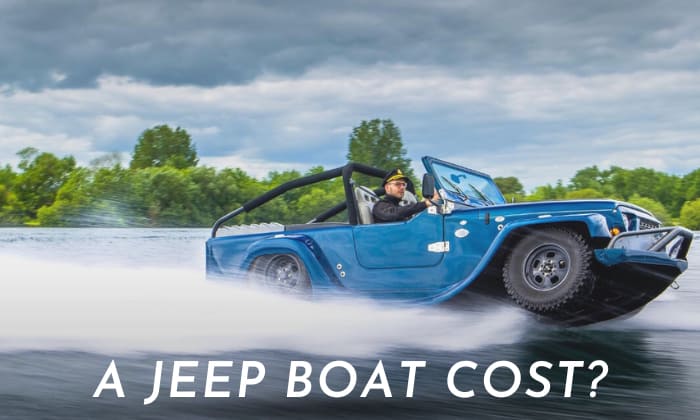 An amphibious vehicle is an impressive vessel because of its unparalleled utility between terrain types. Jeep boat rental makes sense to try it out, but what if you want to own one? How much does a jeep boat cost?

A car boat price can start at around $80,000 to over $160000. Some versatile models, such as an H-1 Panther, can be as pricey as $465000. Let’s learn about commercial amphibious Jeep prices and features in more detail. Keep reading to learn more.

A boat vehicle which is an automobile able to run on land and water, is usually custom-made, which makes standard pricing tricky, but there are a few commercial models available for purchase. And, WaterCar is one such manufacturer.

The company’s most well-known vehicle is the Panthe, which has featuredd in various media and publications.

The original jeep Panther price is $198000 for its complete custom option. However, this package could prove difficult to license and register in certain states, and the Turnkey Minus was recommended in such places.

Various customizations were also available for the Panther, such as a Chromoly chassis, hydraulic shock absorbers, racing wheels, and Panther jet water pumps, along with various other options. 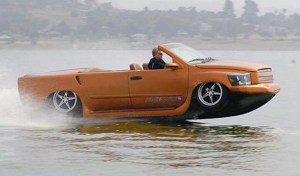 The Turn Key minus package was the lowest priced for the WaterCar Panther at $158,000. You get the custom body but without a motor, custom paint, or the drive train.

However, outfitting it is still relatively simple as a bolting system has been put in place to allow quick installation.

The rolling chassis option is similarly lower-priced but only available for a different unit, the Python amphibious car. This package includes everything needed for the vehicle, including paint but not the car motor. The base price is set at $170000 with an additional $30000 to $50000 for an engine. 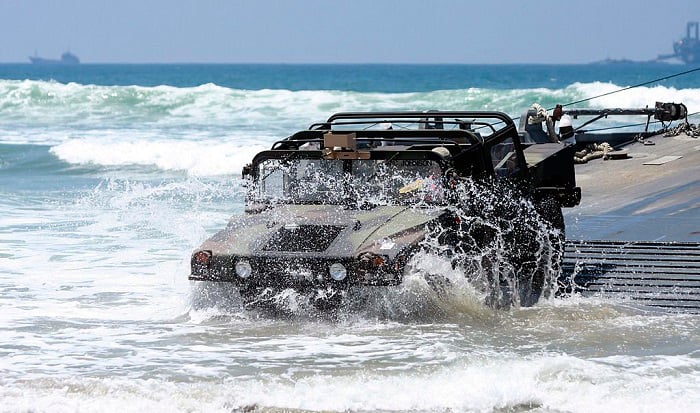 Unfortunately, the base Panther jeep boat has been discontinued and is no longer in production; however, a newer model was launched. The H1-Panther, priced at $465000. While this seems like a steep increase, this line offers significantly more utility Tcompared to all previous models.

It uses a Humvee as its base giving it unparalleled toughness on land and water; it’s durable but also customized to be more lightweight due to the use of aircraft-grade material. While the previous Panther was more of a spectacle, this one is all about utility, as can be seen by gleaning its touted features.

It has fewer customization options available, but the changes seem to focus on this Panther being more versatile, making the higher Water Car Panther price justified. It is also built to order, requiring almost 3 months of work to prepare, so you’ll be in for quite the wait should you decide to buy one.

As for the older model, your only option would be to opt for a used Panther water car.

What is a Jeep Boat?

The Panther is one such type and became popular partly due to its appearance on a popular TV show. WaterCar, its maker, also created other hybrid vehicles, such as the Python, which is a car that turns into a boat.

There are other amphibious automobiles, but those made by WaterCar are probably the most well-known commercial models.

The Amphicar is another well-known amphibious car but is a much older one first released in the 1960s. It was very limited in what it could do but inspired many of the modern hybrid vehicles available today.

The Panther comes with various upgrades that address problems that many prior vehicles had. Among these are hydraulic suspension and lift, making it easier to enter the water from more access points.

What type of performance can you expect from an amphibious car?

The car’s performance depends on the manufacturer and model; however, commercial models are usually made to be high-performance vehicles.

The original Panther is capable of reaching 127mph on land, which is already impressive for most models. Even more so, some can also reach speeds of 60mph while on water.

Is it more difficult to maintain a jeep that drives on water?

Yes, because you need to care for it as both a car and a boat which means you also need both a car mechanic and a boat technician. A jeep on water is also exposed to elements not usually expected of automobiles, so there is more to look out for.

The water car price is steep compared to a regular vehicle, and it is important to consider maintenance carefully.

How much does a jeep boat cost? Now you have more familiarity with the commercial jeep boat price and what makes it as expensive as it is. WaterCar is not the only producer of amphibious automobiles, but its reputation for quality speaks for itself.

Would you be willing to shell out the money for a WaterCar Panther or even an H1? Let us know what your considerations would be if you would in the comments section below.