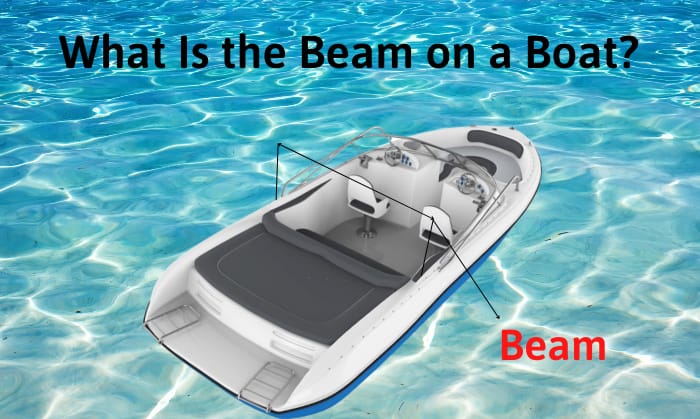 What is the beam on a boat? It refers to the entire breadth of the vessel, with the widest distance between the hull’s gunwales or the port and starboard sides as the main points of reference. This is the simplest beam boat meaning.

If you want a broader definition that will expound on other considerations like beam overall, beam waterline, and beam centerline, then continue reading. You’ll also learn how to measure it and why it’s necessary for navigation and determining the direction of and from the vessel.

Since not all marine vessels are the same when it comes to design, it’s better to stick to the more general definition that it’s the widest distance between starboard and port.

For instance, it’s still valid for a boat owner to measure the breadth of a sailboat beam by using the windshields as the reference, instead of the gunwales. Why? Because, in the end, we’re more concerned with the widest point of the vessel when measuring the beam.

This definition only connotes the Beam Overall (BOA, in short) though. It’s just as important to dive into other considerations (usually related to measurements) connected to it such as the following:

This refers to the width of the hull relative to the ship’s waterline. If you’re not already aware of it, the waterline connotes the point of intersection between the water surface and the sides of a vessel’s hull.

This only applies to multihulls and refers to the distance between the vessel’s respective hulls.

How to Measure the Beam of a Boat 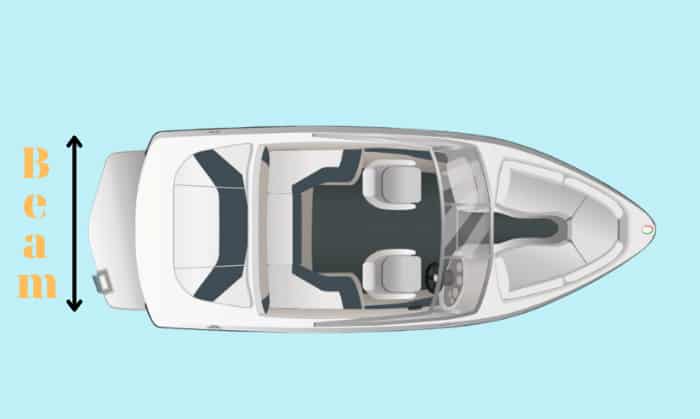 A good, old tape measure will do for getting the exact boat beam measurement. Simply run it from the farthest side of the port to the starboard point that is parallel to it, and you’ll get the accurate beam measurement on a boat.

How can you be sure that you’re measuring the widest part of your boat? You can use your vessel’s line as a point of reference by using the method expounded on this site.

Ultimately, you’ll have to rely on estimations that will only be supported by using the tape measure method. When all is said and done, it’s infinitely better to just rely on a marine surveyor to take the measurement for you.

How Does the Width of the Beam Impact a Boat’s or Ship’s Performance?

Once you get the hang of what it’s like to sail in the open sea, you’ll realize the perks of having a wider marine beam. For one, the wider or lengthier a ship gets, the more stability it enjoys – although more width often means lesser efficiency.

Certain boat makers actually design their vessels with that in mind to help them resist major stability issues like capsizing. Since both length and width are important, boatbuilders meticulously pay attention to the ideal beam to length ratio.

Are you familiar with wide beam boats or widebeams as some folks in the UK refer to them? They are arguably the best example of how much beam width on a boat can impact a vessel’s perks.

For one, not only are they generally more stable, but almost anyone who has owned them or ridden in them can say that they enjoy the spacious decks that they can accommodate. “Precious real estate” is undoubtedly a phrase that gets used a lot when boat owners discuss their vessels, highlighting the importance of space in most boats and ships.

Much like how you have to be familiar with port and starboard for navigating a vessel, you should also familiarize yourself with the importance of other parts and sections. Did you know that the beam is equally vital for it?

For instance, the port beam and starboard beam are often used as points of reference.

You might also encounter seamen using the phrase “abaft or astern the starboard beam or port beam” or “forward the port beam”. Abaft or astern only means it’s slightly behind the beam while forward connotes heading toward the head or dead ahead.

The following illustration provides a good overview of what I’ve explained above. As you can see, the first example has been encircled and represented by slanting lines to highlight its direction relative to the beam’s position.

Not to Be Confused with the “Other” Beams on a Boa 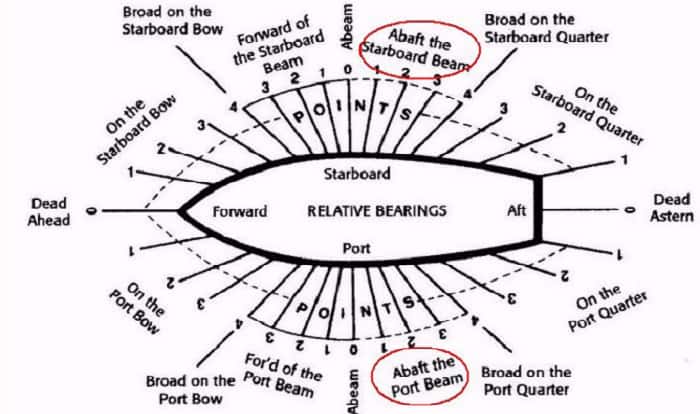 During the latter part of the Age of Sail when pirates still plagued the high seas, ships usually had large steel or wooden beams that run athwartship. They serve highly reliable purposes both as strength members and as an effective way to trap pirates at the same time.

Sailors used to mark the main beam as the queen beam for the latter purpose. Take note that some ships still practice this, even if they already have big steel beams but they use a welding rod to mark them instead.

The fact that there are two types of it on a boat may readily create confusion as to what a beam mean on a boat, right? With that said, it’s important for any sailor to know the distinction between the actual beam of a ship and these deck-reinforcing members.

So let’s sum up our answer to “What is the beam on a boat?” It’s the widest part of a boat or ship, which, in turn, plays a pivotal role in determining its stability and storage space, and it offers referential perks for optimal maritime navigation.

If you want to make sure that your vessel is optimally stable, always take the time to measure the beam of a boat. Moreover, I hope that by adding clarificatory information here, people will finally be able to figure out what a beam means on a boat.